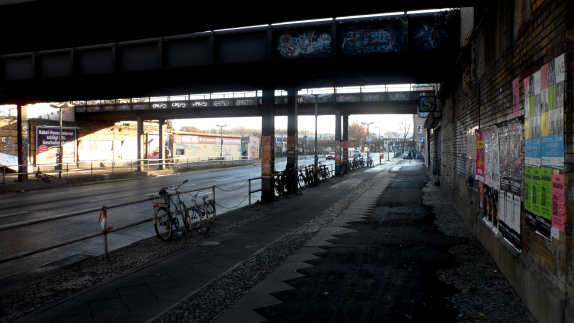 For the past three months I’ve lived in Schöneberg, a predominantly Turkish neighborhood in West Berlin. I have an Apotheke across the street, two discount grocery stores within a two-block radius, the Yorckstrasse S1, S2, S25 and U7 just a three-minute walk away and I have a variety of Turkish bodegas and eats just at my doorstep; on Wednesdays and Saturdays there’s a Turkish market just a block away, good ol’ Hisar’s—reigning favorite of Schöneberg Falafel fans—right by the S-Bahn, and then of course there’s Pasam’s Baklava, home of the best Baklava in Berlin. But if it’s Turkish men that you’re after, well, Schöneberg has them too. Just visit the neighborhood gym and you’ll find a thriving Turkish male community, complete with cheek-kissing and brotherly love. 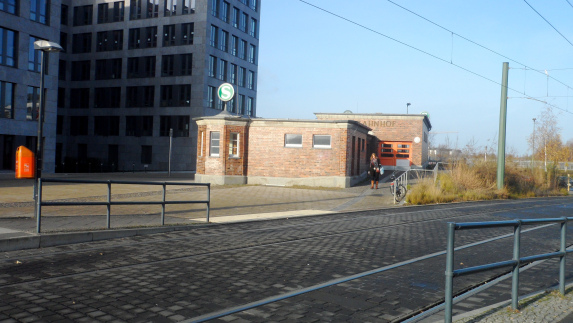 As soon as you hop on the S-Bahn toward Oranienburg though, you’re out of the Turkish ‘hood and en route to up-and-coming Prenzlauer Berg, where I commute to daily for classes. I get on at Yorckstraße at 9:09am, pass Anhalter Bahnhof, Potsdamer Platz, Brandenburger Tor, Friedrichstraße and Oranienburger Strasse before finally arriving at Nordbahnhoff. From there I pick up the M10 Straßenbahn and, five stops later, after Gedenkstätte Berliner Mauer, Bernauer Straße, Wolliner Straße and Friedrich-Ludwig-Jahn-Sportpark, I arrive at Eberwalder Straße by 9:45am. It doesn’t sound like too far of a trek, with just one transfer and a relatively short travel time, but it’s truly a journey from one world to another—from West Berlin into the East, past remnants of the dividing wall and through a dizzying amount of history. I go from what was once, and still very much is, the cap- 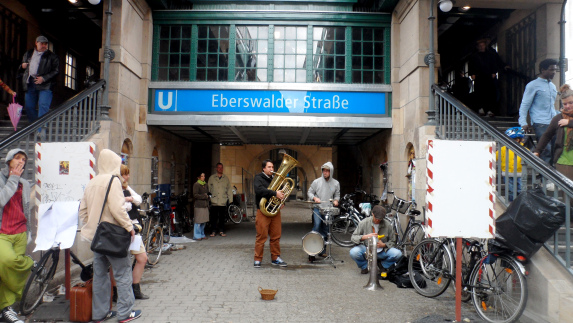 -italist commercial West (though this Yorckstraße neighborhood isn’t quite far West enough to represent traditionally characterized W Berlin) toward what was once, but no longer is, a communist-controlled East Berlin devoid of commodity culture. Instead, I exit the M10 and am greeted by a Impala Coffee and Manolo Café, the first an American-inspired chain with bagels and brownie bites and the latter a semi-high brow coffee and pastry shop. Within their surroundings though, you can find just about any cuisine you’d like: Vietnamese, Japanese, Indian, Thai, British, Spanish, Italian, French, and the list goes on. There you’ll also find REWE (reh-vay), a quality German grocery store, lots of moms and babies, boutique shops and a couple of chains, a number of schools and a bit more money. The place is undergoing massive gentrification and is now seeing a return of new residents after so many fled in 1989.

And so I’m stretched, in a sense, between these two central Berlin localities, feeling just as fragmented as the city is. I’m kind of comfortable here, I’m kind of comfortable there…I’m super comfortable all the way West in beautiful, green Wannsee and then I’m super content East too, in artsy, alternative Kreuzberg. Of course it’s not a new phenomenon to cross the social strata during one’s daily commute, but when you contextualize this kind of movement from one previously untouchable territory to another and account for the city’s newness, it is kind of unbelievable. Just 22 years ago, I couldn’t have lived here in the way I’m living now. I would’ve been stuck on one side of a wall, thinking the grass was always greener. And while I don’t know how the grass really was then, and I still don’t really feel I know what it’s like now, I have an idea of what we might see sprout up soon. 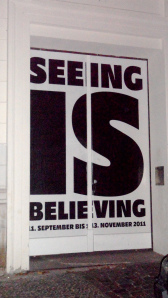 Berlin, in over the course of just more than a century, has been part of the German Empire, the Weimar Republic, The Third Reich, a divided land and now, as of 1989, is part of a reunified Germany. At the risk of sounding horribly pessimistic, the place is almost doomed to change, for better or worse. It has a shifty history and even today, has an uncertain present and future. Sure, it’s regarded as a hipper cultural city of today, but that’s not to say Berlin is without its problems. The immigrant-local divide here is (somehow) quietly gaping, there’s significant underfunding of community projects, which results in developmental stagnation, and there’s the looming threat of a tourist economy taking over. Berlin, at present has about four million inhabitants—a figure that hasn’t gone either up nor down since the early 20th century. In recent years, however, Berlin has seen tourism numbers of close to, or over six million. It’s no wonder that this now-thriving epicenter of German history should attract such attention from the traveling (and other) populations, but is that an audience that Berlin wants to cater or subject itself to? If Berlin becomes a destination of purely touristic value, say like Venice, for example (forgive the subjective opinion), I don’t see Berliners tolerating such exclusion from their own city. It’s the volkstadt, not the auslanders’ Ort.

But then again the topic of who’s a native Berliner is also a complicated, touchy topic. Are the children of the Turkish immigrant workers from the 1960’s—the ones born and raised in Berlin—Berliners, Turks, or in-betweeners without a homeland? If they don’t speak proper German and their Turkish is spoken with a touch of an accent, what box can they squeeze themselves into so they might fit into some kind of mold? It wasn’t until 2000 that Germany passed a law acknowledging citizenship through birth or long-term residency, and even still, this law’s not enough. There are clear integration issues here that seem to have resulted in self-segregation, but it’s a bit of an uncomfortable reality to talk about in a country that’s been marred by its Nazi history; the post-WWII generations have been almost-overexposed to a destructive past to the point of desensitization. I think there’s a legitimate fear now, that an overly present past has inoculated its public such that any talk of integration, immigration or difference feels poisonous and thus remains outside of conversation. Integration in schools? Let’s talk about green energy instead.

I don’t know when exactly it was on my morning commute that I found myself tangled up in these Berliner issues, but I do see now that it’s a rather complicated web. It’s not one that I feel stuck to, being an American study abroad student who’ll be uprooted in just under two weeks, but it’s one that I’m going to curiously watch the weaving of. Will its strings reveal a continuing pattern of societal, political and economic restructuring, or will this German population continue to scurry about this still understated city of space, art and affordability with relative ease?

Because I have more questions now than I had three months ago.

Because there’s a curiosity there now that wasn’t there before.

Because there are more perspectives to complicate the common view.

Because I returned to writing after having a shameful affair with time.

I’ve had a worthwhile time abroad.